Our Merger – Necessary or Convenient?

About 70 members attended a briefing session in the Lecture Theatre at St Peter’s on 18th June 2014 to receive a progress report on the proposed merger between this Trust and Royal Surrey. After an introduction by our Chairman, Aileen, Andrew gave a brief but persuasive presentation on the current situation and the compelling reasons for merger. Although both Trusts are currently performing well, both clinically and financially, the next few years will present challenges to both. These challenges are fourfold. An ageing population, advanced costly technology, even higher quality standards and reduced funding from Government.

No change is not an option. Both Trusts will slip into deficit situations in the next four years with a consequent negative impact on clinical performance.

So, how will the merger stop this happening? Again, four main benefits:

Andrew went on to say that all NHS trusts are working in a ‘Rough and Tough’ financial environment where demand is ever increasing but funding is, at best, capped and may well go down. Working together will not just overcome an imminent difficulty but will provide something better and more stable; built on the excellence of both organisations.

Members then learnt more about how the merged Trust will operate:

In Aileen’s words “This is a coming together of equals in order to maintain and improve quality”, or as Shakespeare wrote “let not to the marriage of true minds admit impediment“

A further meeting took place at Ashford Hospital on 26th June 2014 when another 60 members attended. 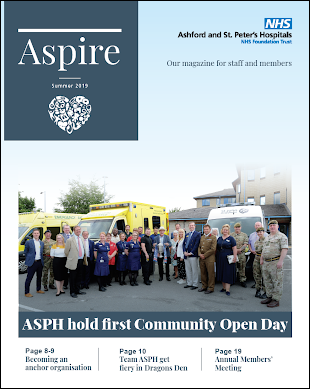