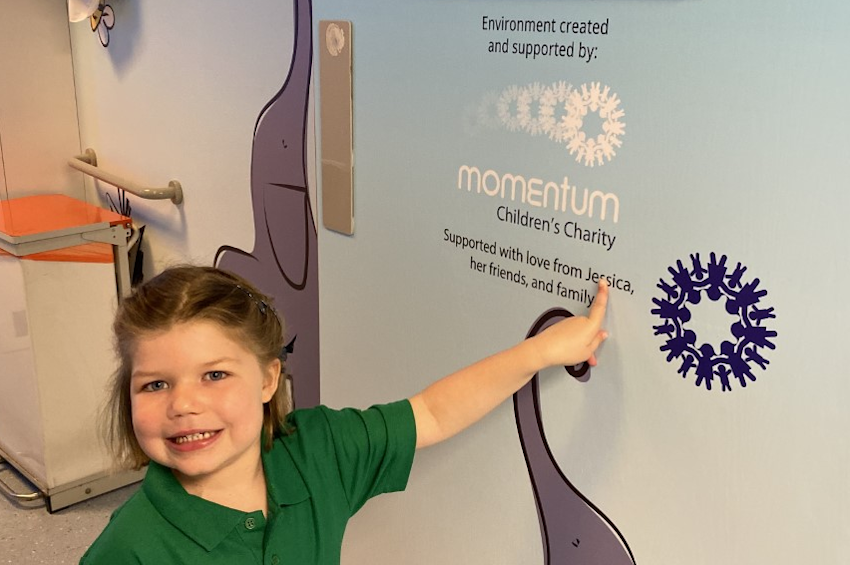 Momentum Children’s Charity has successfully completed another children’s ward refurbishment at Ashford and St Peter’s Hospitals. The colourful artwork can be seen in two newly decorated isolation rooms on Ash Ward. Featuring jungle animals in one room and woodland creatures in the other room, this wonderful wall-art will help reduce stress and provide distractions for the many children who spend time in hospital.

One of the isolation rooms was funded by a family that Momentum Children’s Charity supports, Kate Wells and Kieran Charnock. Their daughter, Jessica, was diagnosed with cancer in September 2017, when she was two years old. In the first few months of treatment, Jessica spent many days and nights on Ash Ward at Ashford and St Peter’s Hospitals. As Kate, Jessica’s mother explains, the children’s ward refurbishments, completed by the charity, made a huge difference to their stay.

“The difference between being in a room refurbished by Momentum Children’s Charity and a plain white walled room is huge. Days in hospital can be very long, especially for a two-year-old. Being in a room full of colour and unique designs really sparked Jessica’s imagination and inspired me too! We stayed in the Jacqueline Wilson themed room and we were able to create stories about the characters.”

“After seeing the difference the room made to Jessica, the overall support offered from Momentum Children’s Charity and the hospital, we decided we wanted to give something back and funding a room refurbishment was the obvious choice.” “Jessica absolutely loves the designs. Jessica is due to finish treatment next month and it’s wonderful to think of all the children that will use the room and enjoy the designs in the future.”

Momentum Children’s Charity worked closely with Ashford and St Peter’s Hospitals to complete the refurbishments. Jennifer Drummond, Matron for Ash Ward, explains, “Many oncology children spend long periods of time on the ward and the wall-art allows patients to escape into a wonderful world of jungle animals and woodland creatures”.

Momentum Children’s Charity support around 200 children diagnosed with cancer and life-challenging conditions, across South West London, Surrey and West Sussex, and a further 75 bereaved families. This year the charity celebrates its 15th anniversary and is hoping to reach its fundraising target of £900,000. Part of the anniversary appeal will enable the charity to continue its work and deliver vital ongoing support to families with children in treatment, and to bereaved families.

For more information on their 15th anniversary visit: www.moment-um.org/15appeal.